Technically, the Texas Legends now play in a brand-new league, the G-League, which the NBA Development League or D-League for short, was rebranded to over the summer.

Since 2009, the NBA’s minor league had been known as the D-League, but when the NBA announced its first title sponsor for its feeder league in Gatorade during the offseason, the D-League officially became historic and the G-League became the league’s new moniker. Of course, many are still calling it the D-League, a group including Legends guard Keith Hornsby.

“I don’t think I’ll ever feel good saying G-League. Every time I say it, it just doesn’t feel right,” Hornsby said. “But hey, it’s what it is. You got to respect (it) and call it. D-League is no more.”

Second-year Legends head coach Bob MacKinnon Jr., who led Texas to a 25-25 record last season, the franchise’s most wins since moving from Colorado in 2009, has a bit of a different perspective on the rebrand.

Maybe that’s because MacKinnon has nearly a decade of coaching experience in the D-League to his credit, including a championship with Colorado in 2009.

But the veteran head coach who now has his sights set on leading the Legends back to the playoffs this season sees the name change as a huge positive.

“My first year in the G-League. We’re all G-League rookies now, right? Every year there’s new things coming like the two-way contract is a new thing. You just learn it and adjust to it, and try and do the best you can,” MacKinnon said. 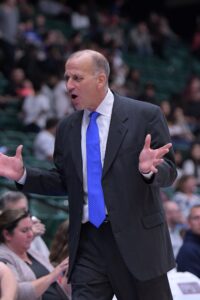 “Our league is, I feel and I’m lucky to be with an organization that feels this way, is that development comes first on and off the court. That’s important to us, it’s important to our organization because we always want to represent the Legends and the Mavs in the correct way.”

Another big change for the Legends this season and the G-League is that this is the first year of two-way contracts. These contracts expand NBA rosters from 15 players to 17 players, but these contracts come with stipulations.

The big catch is that players on two-way contracts, which for the Mavericks is guard Gian Clavell and Baylor product Johnathan Motley, can only remain with the NBA team for a maximum of 45 days per season, which means that Clavell and Motley both figure to see plenty of minutes with the Legends.

Like the new name for the league, it’s a change MacKinnon welcomes.

“I like the fact that guys are now part of their parents’ teams and they do feel like a part of the Mavs,” MacKinnon said. “They are Mavs’ property. The Mavs are invested in them. I think it’s a great developmental piece of the puzzle now.”

Legends big man Jameel Warney, one of seven players returning from last season, sees the rebrand to the G-League from a bigger picture standpoint and also from a marketing point of view.

“It’s great exposure for our league (to have Gatorade sponsoring us),” Warney said. “Now that it’s the G-League, a lot more exposure is going to happen for this league. It’s an important step to get more notoriety and keep getting more credibility.”

But, as fellow Legends holdover Kyle Collinsworth said, it’s going to take some time for him and his teammates to start saying G-League instead of D-League.

“It does sound a little word. The one-letter difference, I still sometimes call it the D-League, but hopefully I’ll figure that one out at some point this year,” Collinsworth said.