The Texas Legends started the 2017-18 season in positive fashion with a 123-119 win at the Austin Spurs on Saturday.

Texas will play three more road games (Friday, Sunday and next Tuesday) before hosting its home opener at Dr Pepper Arena on Saturday, November 18 against the Oklahoma City Blue. 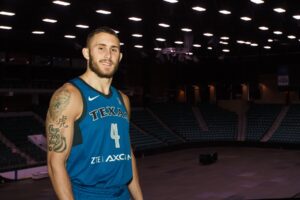 But one thing which appears to already be a huge positive for the Legends is the fact that an NBA G League-most seven players are back from last season, a big plus in a league where roster stability is rarely the norm.

We know pretty much what to do and what not to do, how you got to come to practice every day, what type of attitude and effort (you need), if he (Coach MacKinnon) gets on you, how to react,” Legends guard Keith Hornsby said last week. “He (coach) is going to get on you, but he’s really just trying to make you a better player and make you stronger mentally and just improve your game on the court.”

Last season was Bob MacKinnon Jr.’s first as the Legends head coach and he led them to a 25-25 record, setting a record for victories since the franchise relocated from Colorado after the 2008-09 season.

MacKinnon Jr. and his players have their sights firmly squared on making the playoffs this season, something the Legends have only done once since moving to Texas, and he feels that having much of his core group returning from last season is a great cornerstone to build on.

It’s great. We lead the league right now in returning players. We have seven returning players and I think the next-closest team has three,” MacKinnon Jr. said. “That’s a credit to our organization, to Donnie Nelson and Malcolm Farmer on how they treat the players and the Mavs organization on how they look at the players. Our league is based on having an opportunity to be seen to play, so when you have seven players coming back, I think it says that your organization does it better than anybody.”

It’s nice to see familiar faces. It makes it a little easier for practices for us to limit mistakes, defensively mostly,” Avila said. “Offensively, we play an up-tempo style, so we need to know where each other is cutting, the screens and how they’re going to do it. It’s nice having players that you’ve played with before, but we still are making some mistakes, but we’re improving every day.” Collinsworth has just one season under his belt in the NBA G-League, which the Legends’ circuit was rebranded as during the offseason after previously being known as the NBA Developmental League or D-League, but after seeing plenty of teammates come and go last season as a rookie, he knows just how rare and special it is to have so many familiar faces in the huddle and on the bench to start the season.

It’s not normal, but it’s been good,” Collinsworth said. “My rookie year, (after being in) training camp with the Mavs, a lot of new faces, new things and coming here everything was new rookie season with all the workouts, everything was just new, so it’s nice to come back, know some faces, know the system. It’s given me definitely a big advantage to start this year.”

Several current Legends played in the NBA Summer League during the offseason, a group including Warney, but the Texas big man also played for Team USA in the FIBA AmeriCup. And all Warney did in that tournament was help the Stars and Stripes to the title and earn tournament MVP honors in the process.

He brings that experience back to the G-League, experience which along with the fact he already knows what a season in the G-League is like, will combine to give him a bigger leadership role with the Legends this season.

Yeah, there’s a level of comfortability that you didn’t have last year, so you take on a new role of being a leader, trying to help the young guys out,” Warney said. “But it’s great to have another season under our belt with the Legends and hopefully have a better season than last year.”