Dallas Cowboys fans–we get it. You had one wish at the end of this season – ANYONE BUT PHILADELPHIA. Most Cowboys fans would rather have an invasive root canal than cheer for the Philadelphia Eagles.

But let’s place a pause on our passion for just a moment while we celebrate a former Frisco ISD athlete who will represent his hometown at Super Bowl LII this weekend.

Jay Ajayi was born in London, England to Nigerian parents and moved to the United States when he was seven years old. He attended Liberty High School in Frisco, graduating in 2011.

As a senior, he rushed for 2,240 yards and 35 touchdowns, but despite such impressive stats, he was only lightly recruited by colleges. In the end, it was Boise State where he continued to hone his skills, and in his junior year, Jay rushed for 1,823 yards and 28 touchdowns.

He was drafted by the Miami Dolphins in the fifth round of the 2015 NFL Draft, and in October of this year, he was traded to the Philadelphia “your new favorite team for this weekend only” Eagles.

The Dolphins loss was definitely their gain, as the “Jay Train” made an immediate impact with the Eagles.

In an article published by Frisco ISD earlier this week, Ajayi’s former teachers and coaches expressed how proud they are of their former student, and thrilled to watch him succeed.

This is going to be the first time in the history of the universe that people from the Dallas area are rooting for the Eagles a little bit,” said Brandon Gonzales, who coached Ajayi at Clark Middle School and then at Liberty High, where Gonzales now teaches, assists with the track team and is defensive coordinator of the football team.

Gonzales says he knew Ajayi was a special player and person, and he likes what Ajayi represents for the current Liberty students who are working toward their own dreams. 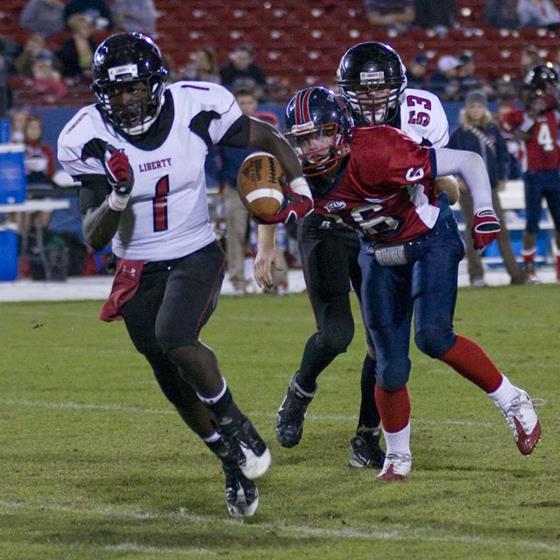 Other Liberty staff members remember Ajayi not only for his stellar athletic ability but also for his upbeat personality and his positive attitude. School Counselor Cissy Blaisure said,

“Jay comes from an exceptional family who supports him and his siblings as well. Jay is an outstanding role model to this school not only for his football accomplishments, but for who he is as a person.”

Before Jay discovered his aptness for professional football, the 6 foot, 220-pound Running Back’s first love was soccer. He played in Essex as a kid and continued to do so after relocating to Texas, all the while playing American football as well.

As a freshman and sophomore at Liberty High School, Jay was a member of the junior-varsity soccer team and played with the varsity in pre-district tournaments. It wasn’t until his junior year of high school and following a significant growth spurt, that Ajayi had to make a choice. He heeded the advice of his father who said, “You really need to choose which one you want to be great at.”

His size and skills directed him to continue playing football, but his passion for soccer continues. Ajayi still watches Premier League games and is a big Arsenal F.C. fan.

Jay’s Frisco roots are deep, with four siblings currently attending school in Frisco ISD, and a youth pastor with whom he remains closely connected. Jay Ajayi with his Mother and his siblings in Nov 2017.

In a personalized video shoutout that Jay sent to his hometown church of Grace Outreach Center last weekend, he said,

I’m so thankful for all of your support and prayers throughout this year. I know it’s going to be tough for all of you Cowboys fans in the building!

I believe that God has been helping me… It’s because of the prayers that you guys continue to send and just His grace as well…thank you from the bottom of my heart for everything and I hope you will be tuned in – I’m going to give you guys a show.”

Kemi Ajayi, a busy Mom, superfan and active real estate agent in the area, is busy preparing the entire family for their trip to Minnesota to cheer on big brother.

We are very excited knowing that we will be watching our son Jay play in the Super Bowl. Having watched Jay’s football career from high school in Frisco through playing college football at Boise State and now in the NFL with the Dolphins and now Eagles has been somewhat surreal. It is a dream come true for him. Jay has been able to use his God-given talents and skills and made use of every opportunity. We are grateful for the journey and looking forward to an Eagles victory.”

Jay Ajayi with his parents, Ibi and Kemi Ajayi at his Liberty High School graduation

If you’re attending a Super Bowl party on Sunday and want to throw out a bit of trivia, here’s a cool fact – Ajayi will be the 5th player from the UK to play in the Super Bowl.

We’ll let London lay a little claim to Jay’s success, but at the end of the day, Frisco has “all the feels” over one of our own representing in Minnesota this weekend. Good luck, Jay!