There’s a sewing room in my childhood home that brings back fond memories.

In the room, there are two chests, the drawers of which are filled with material odds and ends, boxes of needles, and spools of threads… To this day, it looks just as it did in the seventies and eighties.

I grew up in this home watching my mom and grandmother find a sewing solution to almost any problem. If a desired piece of clothing could be made and sewn together, they found a pattern for it.

If a cuddly toy or rag doll had been damaged, it was sewn back together. If a garment was ripped or torn, every effort was made to salvage it.

And of course, there were alterations. My legs and arms were smaller than the average child so almost all my pants and sleeves had to be adjusted to fit me properly.

Despite all of this influence, my sister and I never really took an interest in the art of sewing. But our daughters? Having spent time in their grandmother’s house, both my eldest daughter and my niece decided they wanted to learn how to sew.

Their curiosity began with a general desire to produce clothing out of flat pieces of material. Baby doll clothes, Barbie clothes…

When it seemed their fascination wasn’t a phase, I searched for local sewing classes and stumbled upon Sew Fun Studios in Frisco. 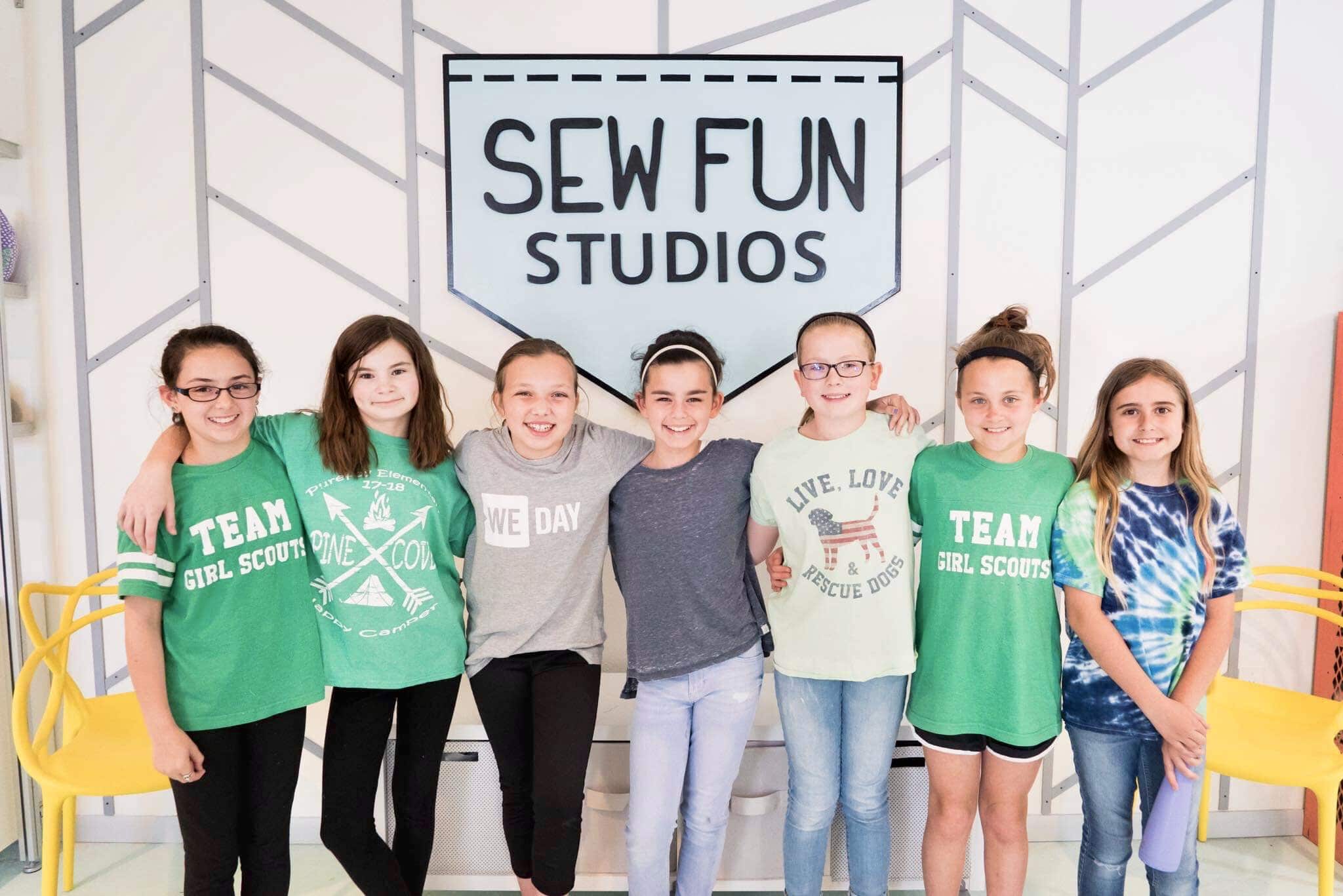 Building a Business One Stitch at a Time

Kaitlyn Baeten is the owner and operator of the what just may be the cutest studio space in the Rail District of Downtown Frisco. Born and raised in the area, she describes herself as “Totally Texan.” Several years ago while living in Carrollton with two young children, Kaitlyn was looking for something she could do that would complement her life as a mom.

She hoped to find something that would contribute to the family’s income but more importantly, she simply wanted to express her passion for creativity and art.

I’m not a seamstress by profession but creating is truly my happy place. I can sew well enough and I’ve always loved to make stuff… I’ll look at a project and say to myself, ‘I can do that’ and will attempt it no matter what the outcome. My best friend describes me as a ‘shameless, hysterical, over-the-top DIY person.’

It was only while browsing Pinterest she came across the idea of hosting her own workshops and soon discovered Sew Fun as a franchise. Working with a mentor who visited from the east coast, Sew Fun Studios provided hands-on training about how to run the business. The Sew Fun curriculum is designed specifically with “little makers” in mind.

The project tutorials have been designed and tested, the end goal being a smooth class where students learn sewing basics, safety, machine troubleshooting, and more.

She would load all of the equipment into her little Kia Seoul and drive to the host’s home or venue of choice. Before long, the business took off.

Kaitlyn credits to word of mouth as her most powerful marketing tool. She explains,

It was the best way for me to start, because while you’re simply putting your business in front of ten kids working a birthday party, it quickly became the norm that one or two of those ten would book you again.

Soon after, she formed relationships with private schools and offered classes as part of their enrichment program. She led a combination of machine and hand-sewing running classes for around ten weeks each or, in some cases, for an entire semester.

Again, each time she would load everything into her car and travel with her supplies on board, bringing all the machines into the school each time…

Finding a Home in Downtown Frisco

The business continued to expand, with Kaitlyn hosting one-time events like GNO’s and group gatherings, and working at different spaces around town. It was evident that now, she needed to find a permanent space that would support her growth.

It wasn’t long before Kaitlyn found “the one” – the property that would perfectly suit both her family and her business. She convinced both her husband and her realtor that this is where their future would unfold! She later discovered the house was once owned by Dr. Rogers, the first Frisco Mayor, and a doctor. The Rogers Family were dedicated advocates of education. Now, the property could once again play a role in furthering the education of young children – and in a really fun and creative way!

In May of 2017, upon completing renovations, she launched her first on-site camp in the charming new, downtown studio.

Having Sew Much Fun in Frisco

Sew Fun Studios – Frisco has now been in business for over three years and her team has been with her from the start. She felt it was important to seek out like-minded people who really shared the passion to teach kids art and skill.

It’s so important to me to have staff on board that love what they do. I don’t want kids to have experience with a grumpy teacher. It must be a pleasant and fun time for all so they want to return again and again.

Now, well-settled in her downtown space, Sew Fun Studios offers an array of options for kids to have fun and learn. Besides birthday parties, they offer camps and custom group gatherings.

All materials are provided, so once booked, all you have to do is show up at the studio! The kids get to choose from their specially-curated selection of adorable fabrics with patterns on them, such as cupcakes, donuts, unicorns, owls, llamas, and more.

Kaitlyn says she loves to watch the students mix and match different patterns. They tend to have no fear and take risks on what colors might blend with certain characters and styles.

In a typical two-hour camp, they’ll dive straight into using child-friendly sewing machines, starting with a basic safety lesson. Then, they get started creating!

The kids often come up with fun sayings and songs while they’re sewing, and we have fun races; like, who can wind a bobbin first and who can sew a pattern the quickest. In two hours, they’re all so excited about what they’ve accomplished.

A typical birthday party will start with food and cake for about thirty minutes and then the next hour and a half is dedicated to sewing. The kids take home what they make, which can also serve as the party favor. The most popular party creations are tote bags, donuts, unicorns, and animals.

Discussing how she feels her business might be different than others, Kaitlyn explains how she enjoys watching the kids embrace a passion.

I’m most proud of how kids feel when they arrive. They find friends and a welcoming, creative space. They find a community of kids who love crafting. These kids may not be into sports but find their passion here. And it doesn’t hurt that it’s a super cute space and business.

Creating for the Community

Although nestled in downtown Frisco, Sew Fun Studios has made an impact beyond our county lines. During the summer, they partnered with Medical City Children’s hospital in Dallas to make soft fabric hearts for the moms and new babies in the NICU. Little hearts were sewn from material scraps and sent to the hospital. The moms would place the heart on their skin for a time to pick up their scent. When it was time for the mom to leave, the heart would be tucked in with their baby.

Recognizing the scent, it provides a sense of comfort and therapeutic development for the newborn.

Sewing Seeds for the Future

As a member of the small business community of downtown Frisco, Kailyn and her team are is excited about the forthcoming Rail District revitalization plans.

How incredible is it for the downtown residents and business owners to have everything they need day-to-day within walking distance, fully immersed in the history of downtown Frisco, surrounded by 100-year-old homes..

Check out Sew Fun Studio’s schedule and consider introducing your child to this cute, creative space in Frisco.